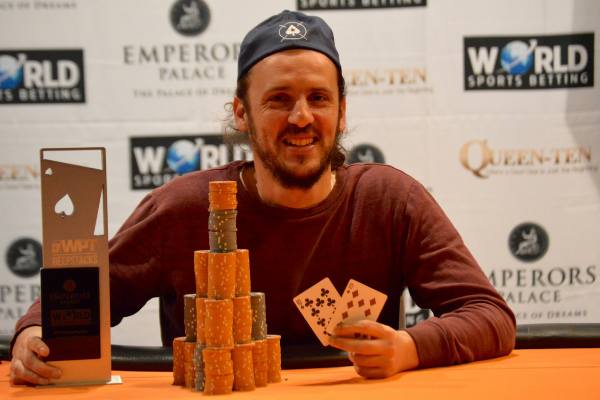 Poker crowds flocked to Peermont's Emperors Palace between 13 and 22 October, ready to take their seats at the most prestigious and talked-about poker event in Africa, the World Poker Tour® Emperors Palace Poker Classic 2017.  “I am thrilled to announce that the event smashed all previous poker tournament records in South Africa with 1 600 entries across 10 unique events, boasting a prize pool just shy of R18 million.  The closest we have come in the past is November 2013 and October 2015 when the total buy-in was R14.9 million and the prize pool was R13.4 million”, comments an elated Bob Yearham, Peermont COO for Gaming.

Amongst the 10 WPT® title winners, Daniel Habib came out tops to claim the WPTDeepStacks Johannesburg Main Event title in the early hours of the morning on 23 October.  In a competitive field of 456 entries, Habib’s perseverance paid off with a massive taking of R1 million.  Other notable events include the High Roller, which surpassed all past event pay-outs, with Vijay Nalajala taking home R1 million from a field of 92 entries.

“I am very proud of the efforts put into the event by team Gary Lentin and the rest of the ShuffleUp Poker team.  Thanks to our partners from the WPT® based in California and the strength of their brand internationally.  And to everyone behind the scenes at Emperors Palace, who worked long hours, who did the preparation & setup for the event - a huge thank you to all of you for going the extra mile and for making the event the success that it has turned out to be”, commented Yearham.

“The success of this series shows that poker players across South Africa and the continent are still excited to play in poker events in great venues, where a genuine international poker experience is guaranteed.  I’d like to thank Bob, Emperors Palace General Manager, Clive Tavener and the resort’s team for their tremendous effort”, says Gary Lentin, Queen-Ten CEO.  “I would also like to thank our behind-the-scenes heroes, Tournament Directors Salvatore Elio Capuccio and his assistant, Matt Fish.  Last but not least, a huge thank you to our Sponsors World Sports Betting, and congratulations to all the players who cashed in, particularly all the winners”, Lentin concludes.

As is customary with all WPT® events, numerous celebrities joined in on the poker action to give back to organisations in need.  In the first of two celebrity challenges, two heavy weights in the business world, Kaya FM 95.9’s Managing Director, Greg Maloka and Peermont’s Bob Yearham went head-to-head in an epic poker clash, all in aid of charity.  Up for grabs was R20 000 to the charity of the winners' choice. While Maloka won the event the two decided to split the winnings, which resulted in Maloka's charity, Zandspruit Primary School and Yearham's The John Wesley Chidlren's Home each taking home R10 000.

The second celebrity challenge saw the likes award-winning sports presenter, Carol Tshabalala, soccer legend, Mark Fish, SuperSport United's Dean Furman, Bidvest Wits' Darren Keet and 947’s Alex Caige go all in for charity.  At the end of the evening, and through a series of re-buys, more than R19 000 was donated to two worthy charities, The Orlando Children's Home and We Care.

“Having concluded its 11th annual official series, the WPT® Emperors Palace Poker Classic’s record turnout not only proved that Emperors Palace is the home of South African poker, but that the WPT® is an ultimate poker event for both international professionals and local enthusiasts.  We intend to make the success of this tour our new benchmark and will strive to reach even loftier heights in the future”, Yearham concludes.